I’ve decided to try a new approach with WIP photos – showing them after the models are completed. I quite like the impact that seeing a completed model for the first time has, without a long series of WIP spoilers. 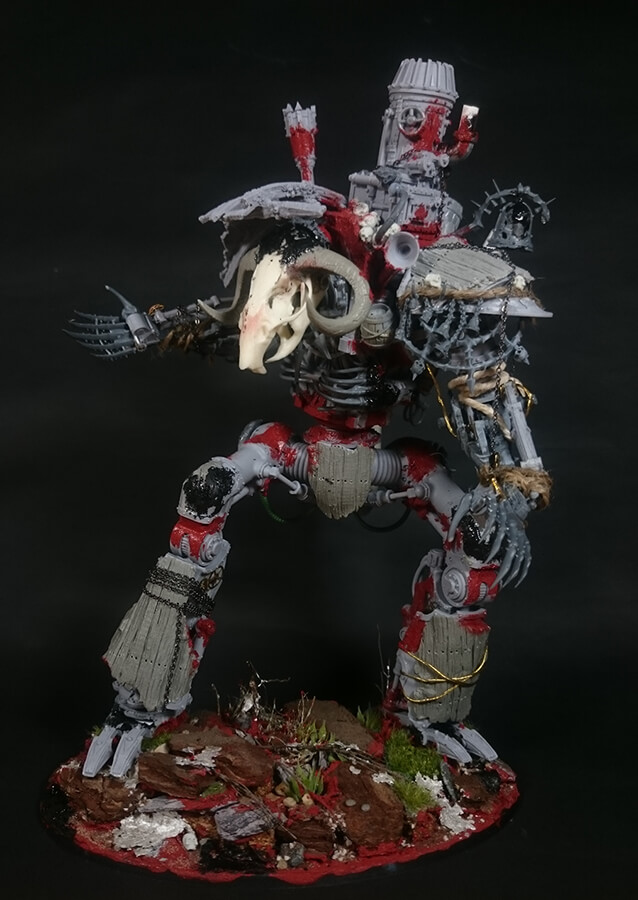 The Mechanical Vermin Lord is made from a Forgeworld Knight Lancer, with a real rat skull for a head. The wood is sculpted from putty and press-moulded from the wreck of a boat on the Merwyrm kit’s base. The arms are entirely built from odd-and-ends, including most of a plagueclaw catapult and parts from a Chaos Dwarf Skullcracker.

I used lots of different chains and types of string to add texture. You may notice the base looks like a huge mess, this is from all the different products and materials I have used to add variety. The Chaos Lord is based on Mortarion from Forgeworld. I have done horrible things to the kit as you can see. I use liquid green stuff to add a little bit of texture. The red paint is also textured – you could use Games Workshop basing paint. I don’t like how Games Workshop plastic kits are extremely smooth and I find the combination with Forgeworld parts very jarring – a bit of texture increases the fidelity of the plastics. 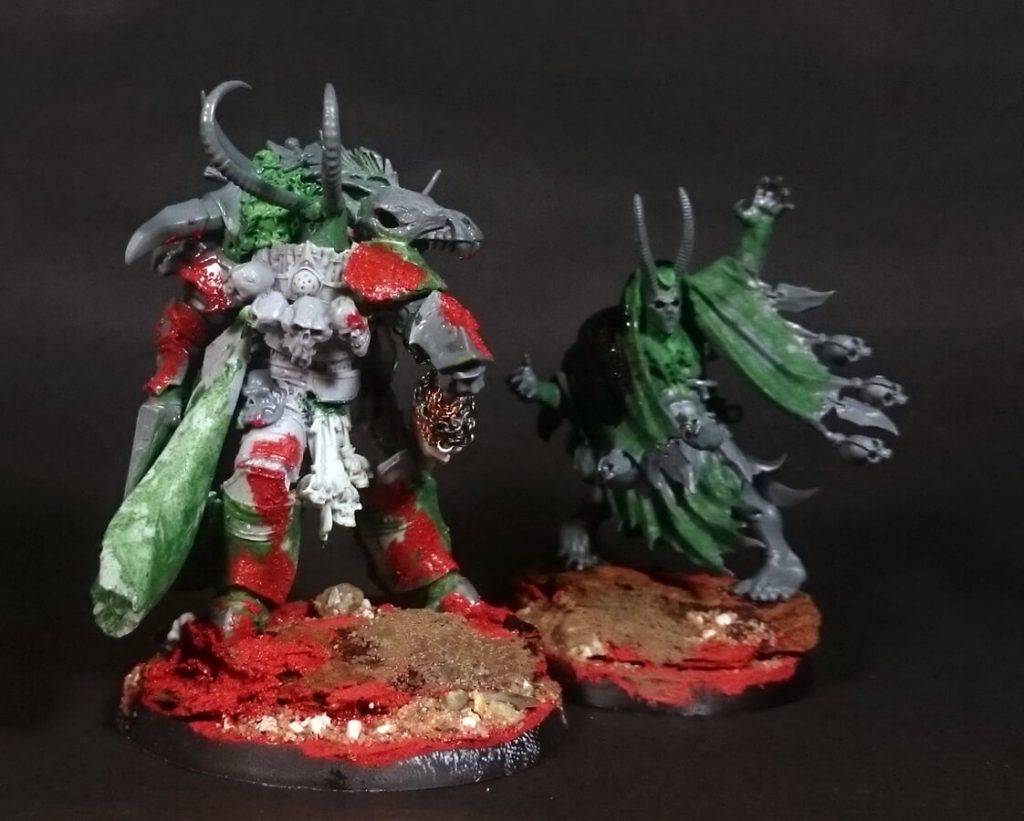 Mortarion has a bit of a strange pose and it was hard to get a powerful stance. I had to extensively resculpt his feet to disguise the Space Marine origins but otherwise his armour is suitably archaic. The sorceror is a really simple head and hand swap on an Orruk. Liquid greenstuff is used for texture, and crackle paint – the plastic would look too smooth otherwise in comparison with other models in the warband.

The knight is based on a classic Warhammer model of a Chaos Knight on a skull-faced horse. This model is based on a Varanguard (the only one with a pose I like) and the torso of a Gal Vorbak from Forgeworld. The weapon is from the Blight King set, they have great, mean-looking weapons if you fill in the holes. These models are a combination of Chaos and Orruk parts, the two on the left use Orruk torsos and arms on the legs from Chaos Lords. All the helmets are Chaos helmets with the mouths filled in and the eyes drilled out. Greenstuff fur is used to cover over any joins! The central model is the leader of the chosen, and the idea was that he is closer to daemonhood, with some of Malal’s insectile attributes. I wanted him to be a former champion of Slaanesh, and he has an arrogant pose. He is made from the Lots-O-Huggin’ Broodlord (now OOP). I get a perverse thrill from using models no-one else would consider. They have weapons from the Forgeworld Bladeslaves. These are both made from Bladeslaves. The feet had to be resculpted and the belts covered up, but otherwise you can’t tell they wore power armour. I used Varanguard arms.

Simple conversions, mostly from the starter set Khorne. The leader was originally going to be the leader of the warband, but got demoted to leader of Marauders because he looked tiny next to the Chosen. I was OK with them having some Khorne symbols and added symbols from other gods – the idea is they have all been abandoned by their original patrons and have turned to Malal.

Greenstuff hair and beards takes a while. Lots of rolling very thin strips and then rolling them together into dreadlocks. I used various beastman parts because I think Chaos hordes should be a mix of mortal, beastmen and daemons. The daemon prince is loosely based on Zodd from Berserk. I sculpted the head (starting with a Thundertusk head) and added some fur to the base model – a discontinued Greater Elemental of Beasts from Forgeworld (a gift from JB, thanks!). I used static grass and a home made electric applicator to create a more realistic (some may say cute) layer of fur on top of this.