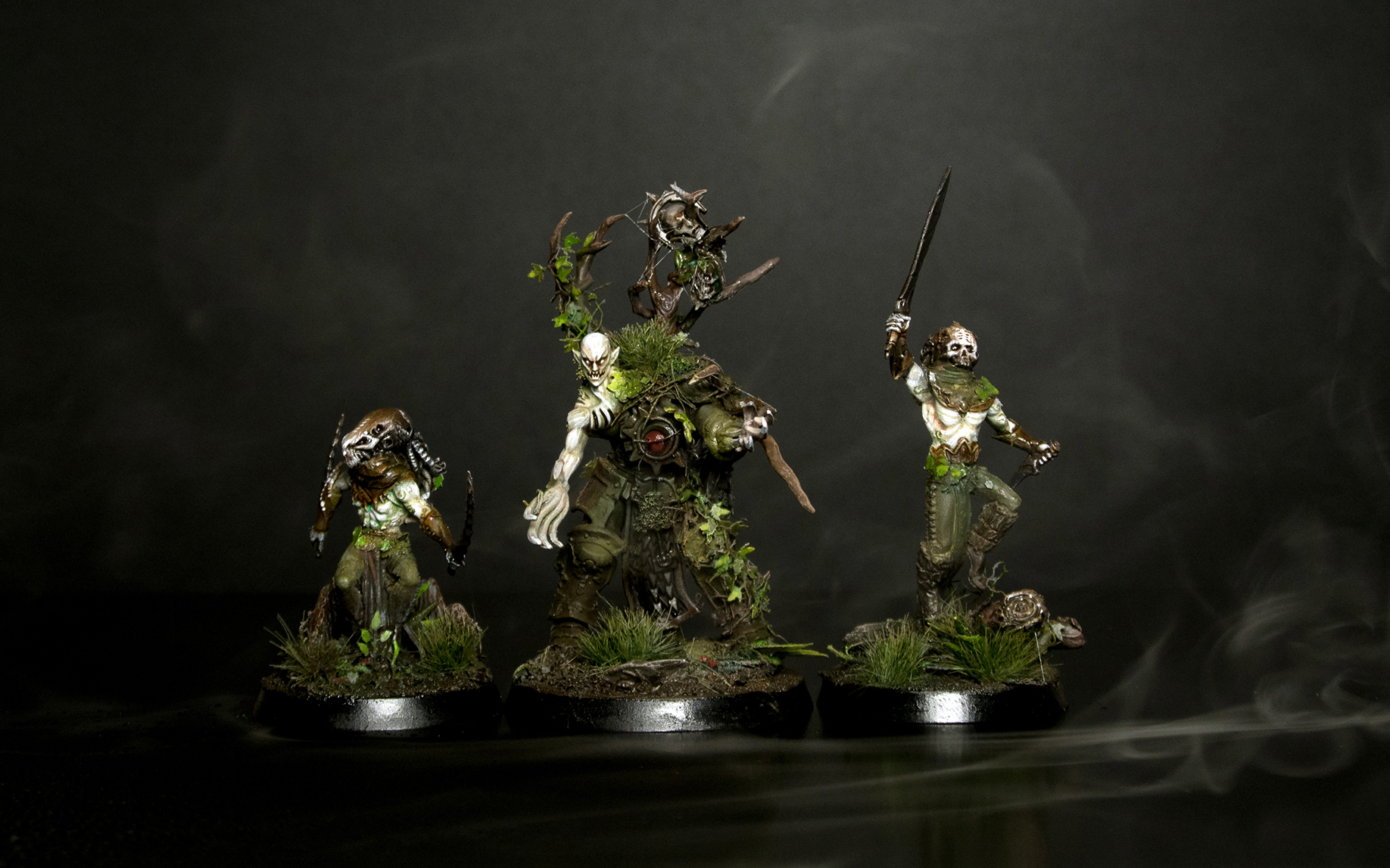 Aelves of the Black Sloth Hell

Long ago, when the true God of Death returned to claim his realm, the lesser gods who had claimed some of his power fled in fear, or tried – in desperation – to fight. But none could hope to fight the Great Necromancer, and few were able to run. One such creature, once a weak and miserable daemon, had claimed the role of the god of death for those that would die in their sleep – for those that closed their eyes at night and fell into nightmares they never woke up from. It was a small power, but it was not a power it valued above all else, and so when the Necromancer returned it fled up through the cracks in the walls of its lightless cave, and then through the cracks in the walls of the Realm of Death itself – blind and scared, probing and pulling itself along with pale, hooked appendages, through madness, through the centuries.

Eventually it found itself in a lake in a new Realm: Ghyran, in the midst of a forest full of life. It hid in the murky depths of the water, while the name of the Great Necromancer echoed in its head and it cowered, believing at any moment it would be found. Its presence poisoned the forest – the mangroves rotted, the people fell to corruption and filth. And then the thing that once was a god felt vulnerable; scared of being alone. It called out – in dreams and in nightmares – it called out to anyone that could hear.

And in time, the Aelves answered.

The Black Sloth Hell: a drowned forest in the Realm of Life. The forest is poisoned from within by a mad god of death and the Aelves that live there are trapped in its recurring nightmare. They believe it to be a place from the stories they were told as children, a place where Aelves were punished with a loss of beauty and speed and grace. Even in death there is no escape because the mad god’s power brings them back: broken, drowned or worse. They protect the lake at the black heart of the forest from the beasts that were once the people who lived there, and from intruders like the Stormcast of The Immortal Tribunal and the Chaos forces of Malal.

This is a warband for AoS28, built with half a mind to playing Hinterlands, but without worrying too much about rules or points. I started this project before Age of Sigmar, and the story of the Aelves has changed slightly: the Nine Realms gives a lot more freedom to people like me who just really want to make up their own stuff, unencumbered by too much background or lore that needs to be tied together. The original story can be found as the Black Sloth Hell Prologue and it continues in most of the other Fantasy miniatures galleries I have made. It will be easier to carry on with it now that AoS28 gives the freedom to make smaller sized forces: in fact that is one of the reasons I came up with AoS28, it just takes too long to paint up an army and I want to get to the next bit!

I wanted to create a warband that included the most important Aelven archetypes as I saw them. Originally this included an eagle rider and some archers, but they didn’t make the cut. I have another 10-15 spear men that are also, gladly, sidelined for now – painting a full unit is not something I enjoy, and I am really burnt out on making tiny dreadlocks.

The newest model is the Spite-Revenant. I like the look of these and it fitted in with a story I wanted to write about the Aelves and a Stormcast prisoner. There is a rather horrendous torture called scaphism (not a google search for the feint of heart), and this is how this Spite-Revenant has grown: inside a Stormcast, who is denied Sigmar’s lightning within the Black Sloth Hell.

I wanted to include a treeman: these used to be part of the Wood Elf army so I had included them together with elves as it was pretty standard. In AoS28 it doesn’t matter: looking cool is more important than anything else. I like the Miyazaki-style treemen that the Sylvaneth have, but they are nothing like the look I wanted, which is more like Sláine or the Witcher. It is inspired by the gloomy opening passage of The Road by Cormac McCarthy.

AoS28 is great for this sort of project, you can explore a concept without stretching it too thin or getting bored of it. Swamp elves aren’t particularly original but they are something I really wanted to have a go at and I think it went OK. Now that is done I can have a go at something else without getting sick of them.

They ended up a lot greener than I had intended: originally I was not planning on using green at all, instead basing the colours on Beksinski (whose twisted paintings often look like tortured elves). But green just sort of happened, and then it happened even more with the bases when I was unable to get a dead swamp effect that looked right. I had a lot of trouble getting good photos of these models for some reason, maybe due to all the gloss effects.

In a future AoS28 warband I would like to explore something stranger – although these Aelves are a bit different from Wood Elves they do still look like they could be from the Old World. AoS is less restrictive than the Old World: in the near infinite Mortal Realms, anything is possible.

Does a warband need a soundtrack? Probably not, but this is what the Aelves might listen to. 21 Comments on “Aelves of the Black Sloth Hell”